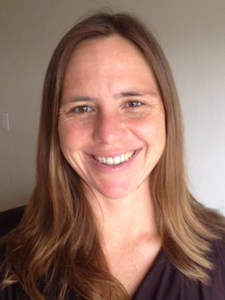 Annie has worked for the last 21 years in various capacities with Seeds of Learning. She began as a work group volunteer in 1994, and later returned to work as an intern during a semester abroad program in 1997 and the summer of 1998. In 1999, Annie began full time work with Seeds of Learning as the Program Administrator. She split her time between Nicaragua, El Salvador, and the US. Later she became the Program Coordinator, Director, and 8 years ago, SOL’s Executive Director.

Annie enjoys working for SOL because she believes in the approach to community development, the staff, and the community members with whom she works. “The idea of listening to community members’ needs, their dreams, difficulties, hopes, and finding a way to work together with them, staff, and volunteers is very inspirational. Also, seeing the impact that participating in a work group has on especially teen and youth volunteers, and how it changes their perspective in life is awe inspiring.”

She has a bachelors of arts in Political Science with Concentrations in Latin American and Peace and Conflict Studies from Swarthmore College.