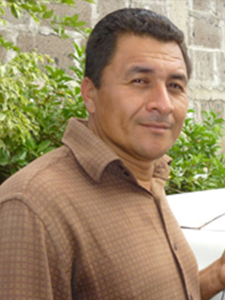 Richard’s first job was as an apprentice mechanic at the Oscar Benavides Company in Sebaco, Nicaragua. He was drafted into the Nicaraguan army and was trained in various military techniques. Eventually his superiors noticed his skills as a mechanic, and had him trained in handling and maneuvering tanks and heavy transport to the battlefield.

When the war ended, the soldiers returned to civilian life. Since then, Richard has worked as a driver, mainly hauling materials to different communities and cities. Between 1994 and 2001, he worked with the organization El Porvenir in Ciudad Darío. He now works for SOL, where he is in charge of driving and maintaining the vehicles. He also works for the municipality of Ciudad Darío, where he repairs and maintains its fleet of over 25 motorcycles.

Richard says, “I think it’s impressive that SOL has so many educational programs for children. I know that the support provided by SOL in building schools in rural communities is a great blessing for the humble people of Nicaragua. I enjoy working with SOL because I like helping others.”