The sun has set on our third day here in Puerto Rico. This morning we began our work in the Trama farm. Our team divided into three groups to work on different tasks. The first group worked on composting our food waste and learning the composting process as well as digging the hole that will serve as the bathroom. The second group watered every plant, weeded and cleaned the seeding beds and harvested what was ready to be picked. The final group worked on clearing more areas of the forest to make more seeding beds and expand the farms production area. After all this, we spent the afternoon touring the town of Arroyo, which used to be a major port city and economic hub for the island, but has since seen much of the town’s culture and glory of old fade away as many locals have been forced to leave the island due to lack of employment opportunity and from the effects of hurricane Maria. Finally, we celebrated a work group volunteer’s 16th birthday with a small dance party and ice cream sundaes. Internet connection tonight is poor so photo attachments won’t upload, but I will send them as soon as possible. Tomorrow we will be working with Puerto Rican university students on the farm who will teach us their various disciplines in which they are studying.
Best
Dominic 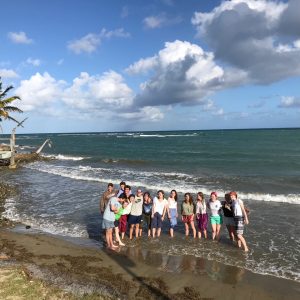